CHICAGO, IL – As part of a nationwide fire prevention campaign, the American Red Cross of Chicago & Northern Illinois teamed up with the Greater Auburn-Gresham Development Corporation (GAGDC) on Sat., July 23 to install smoke alarms and teach families about fire safety.

Together, 60 volunteers from both organizations installed more than 400 smoke alarms in the South Side neighborhood.

As volunteers went door-to-door installing alarms, residents welcomed them into their homes. They called neighbors who also needed the alarms to tell them about the Red Cross.

“Usually people my age they get out just fine, but children and seniors, those are the biggest casualties and I would hate for something to happen when I could have prevented it,” Hunt said.

The American Red Cross is known for responding to emergencies, but will continue its effort to install alarms and prevent them before they occur.

“Because of the tremendous efforts of our volunteers working alongside our partners like the Greater Auburn-Gresham Community Development Corporation, hundreds of families are now safer and know how to escape their home in less than two minutes if a fire should occur,” said Harley Jones, Regional Disaster Officer, American Red Cross of Chicago & Northern Illinois. 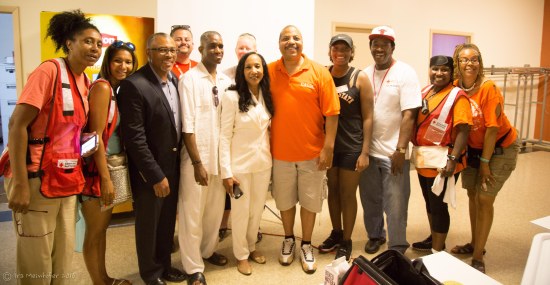 State Senator Jacqueline Collins, Alderman David Moore of the 17th Ward, and Alderman Howard Brookins, Jr. of the 21st Ward also stopped by to thank volunteers from the GAGDC and Red Cross.

WHAT PEOPLE CAN DO People can visit redcross.org/homefires to find out more about how to protect themselves and their loved ones from a fire. They can become a Red Cross volunteer. They can also help by donating to Red Cross Disaster Relief by visitingredcross.org, calling 1-800-RED CROSS or texting the word REDCROSS to 90999 to make a $10 donation. Donations to Disaster Relief will be used to prepare for, respond to and help people recover from disasters big and small.