CHICAGO, IL – In a four-story apartment building on the South Side, four generations and 10 members of the French family received a visit July 23 by the American Red Cross.

From the basement to the top floor, volunteers installed 15 smoke alarms in the building and planned an escape route for everyone inside in case of emergency. 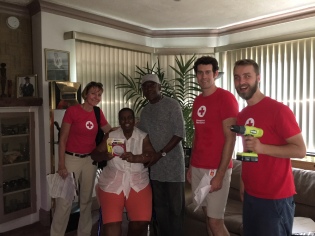 Gresham Development Corporation was coming to his neighborhood and opened the door to have his entire building equipped with new, 10-year battery smoke alarms.

“Anything to protect my family,” said Larry, whose elderly parents, Howard and Queen, live below him on the first floor. “I look out for them all the time, you only got one parents; and we all have to help out one another.”

Inside each residence, the Red Cross installed smoke alarms near the kitchen and sleeping areas. In the common stairwell, an old smoke alarm was chirping, so the installation team replaced that one too.

“You never know when a fire will happen, you could be in your pajamas and it’ll just happen,” Howard said.

Larry’s cousin, Crystal French, lives on the top floor with her young boys and felt better knowing her family was safer and knows what to do to help all members of her family on all floors during an emergency.

“It’s all about keeping constant contact, it’s important to ask family: Are you okay? Do you need anything? Since the Red Cross gave us this education, we now might be able to work out a good safety plan,” she said. 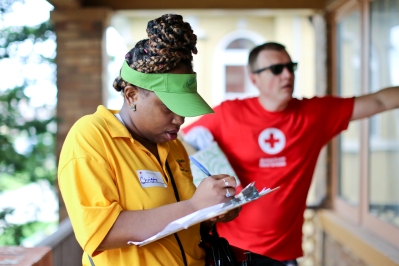 In addition to the 15 smoke alarms installed in the French family’s complex, the Red Cross, joined by community volunteers from the Greater Auburn-Gresham Development Corporation, went door-to-door in the Auburn-Gresham community and installed more than 400 smoke alarms in a single day. More than 60 volunteers from both organizations also educated residents about fire safety and helped families create a personalized escape plan to exit their home during an emergency.

fire deaths and injuries by 25 percent. Working with fire departments and community groups across the country, the Red Cross is installing smoke alarms in homes in neighborhoods at high risk for fires and teaching residents about fire prevention and preparedness. Locally, the Red Cross will install 6,600 smoke alarms in the coming months in communities across Northern Illinois.

WHAT PEOPLE CAN DO People can visit redcross.org/homefires to find out more about how to protect themselves and their loved ones from a fire. They can become a Red Cross volunteer. They can also help by donating to Red Cross Disaster Relief by visitingredcross.org, calling 1-800-RED CROSS or texting the word REDCROSS to 90999 to make a $10 donation. Donations to Disaster Relief will be used to prepare for, respond to and help people recover from disasters big and small.