August 3, 2010 By redcrossstories in Events Tags: American Red Cross, American Red Cross of Greater Chicago Leave a comment
Like father like daughter, the Satter family is doing their part to help those in need. John Satter is a volunteer in disaster services with the American Red Cross of Greater Chicago. “I enjoy working with the Chicago Red Cross because I’m part of an organization that provides assistance to those in need,” John said. “I feel a sense of pride when I see the efforts being carried out locally, nationally, and internationally.” He and his 12-year-old daughter Liz joined forces with her basketball team to raise support for disaster victims in Nashville. Liz and her basketball team headed to Nashville for a tournament and decided to give their time, and even their victories, to charity.
The team of 10 girls competed in an AAU Basketball tournament against 60 teams from all over the country. The team asked the crowd to make pledges based on their scores during the tournament. The girls ended up scoring 10th place in the tournament, scoring a total of 257 points in six games. The girls received pledges of nearly $10,000, which was donated to the American Red Cross for disaster relief. The girls also took time out of their schedules to help out at the Second Harvest Food Bank in Nashville.
“It was life-changing and unbelievable,” said 12-year-old Madie Kaebler, one of the players. “When we went to the food pantry to help, we couldn’t stop once we got started. It was an experience I will never forget.”“What I liked most about the trip was the chance to be with my friends,” said Maddie Welter. “It’s really fun when you know you’re doing something fun and helping other people.”
To find out how you can make a difference go to www.chicagoredcross.org 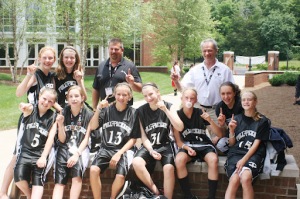