On Tuesday September 25, CBS-2 Chicago and the American Red Cross hosted a telethon to benefit the victims of Hurricane Florence. Often held in November, this year the telethon was moved up to September to focus on the response to Category 3 Hurricane Florence along the east coast.

From 6 a.m to 7 p.m the phones kept ringing with donations ranging from $1 to $1000.  A grand total of $1,155,853 was raised between check donations, phone calls, and online donations. Special thanks go to Walgreens, U.S Foods, U.S. Cellular, Conagra Brands, and Abbvie for their generous donations. Also, a big thank you to Portillos who provided a matching gift of $5,000. 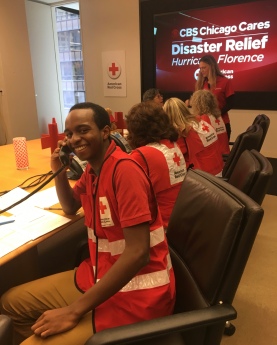 Volunteers worked on the phone for hours.  “After seeing what happened in the Carolinas I just felt like I needed to do something,” said Ogechukwu Flagg-Igbo a Northwestern student.

Other volunteers felt a need for action as well. A disaster shelter volunteer, Bari Rosinski, felt like this was the next best thing she could do in order to help victims, although she really wishes she could physically be in North Carolina helping. 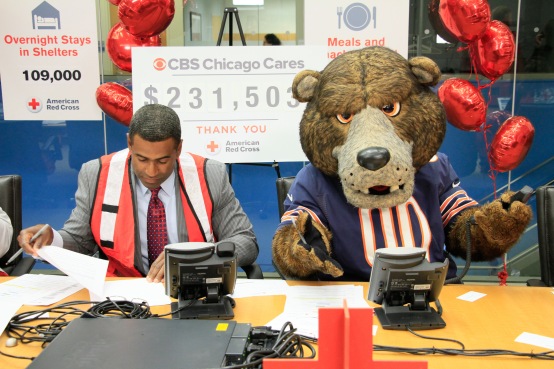 The Red Cross had a very special guest help out on Tuesday. The official mascot of the Chicago Bears, Staley Da Bear, not only entertained volunteers, but also answered phone calls.

Contributions will continue to be accepted to assist relief efforts. Donations may still be made by calling 1800-RED CROSS or by texting FLORENCE to 90999 to make a $10 donation.

More than 200 blood drives have been forced to cancel due to Hurricane Florence. The Red Cross urges people in unaffected areas to make an appointment to give platelets or blood to care for patients in the Southeast and throughout the country. Appointments can be made by using the Red Cross Blood Donor App, visiting redcrossblood.org or calling 1-800-RED CROSS.