May 14, 2018 By redcrossstories in Heroes Breakfast Leave a comment

Each year, the Heroes Breakfast honors local heroes who step up to save lives or help those around them. The American Red Cross of Chicago & Northern Illinois held its 16th annual Heroes Breakfast on Thursday, May 3. Our youngest hero this year was seven-year-old Olivia Shorter, who received the Blood Services Award and proved that anyone can be a hero. 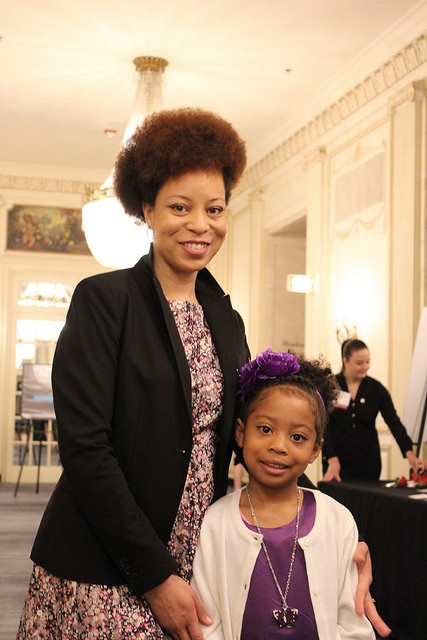 Shorter’s story starts in the hospital where she was born and diagnosed with sickle cell disease, a genetic disorder that breaks down her red blood cells. So far, Shorter has had over 100 blood transfusions and even had to have her spleen removed.

Despite what she has been through at such a young age, Shorter still wants to help others. For her seventh birthday she told her parents she wanted to have “a party for the children with sickle cell.” But that’s not all they did. For Olivia’s birthday, the Shorter family hosted a joint party and blood drive with the American Red Cross, drawing in more than 200 people.

Throughout the morning, the heroes stories only continued to impress and there was a sense of humbleness about those honored. Like Dr. Leona Di Amore, recipient of the Emergency Medical Assistance Award, who insists, “it wasn’t heroism, I’m just a mom who had great skills.” Indeed she does, Di Amore is a doctor and is a former Navy medic.

Di Amore was visiting her daughter for Mother’s Day at the University of Texas at Austin when they heard a commotion as students began running through the campus. She ran toward the situation to find that a man was attacking individuals on campus with a machete-like knife. One student was the victim of an attempted beheading and had a cut on his neck that was so deep his spine was exposed; she packed his wound and kept him safe during the chaos.

While Di Amore happened to be the right person at the right time, she says, “Anybody can be a hero, they just have to have courage and kindness and compassion.” Which describes the situation Kate Dzierzanowski, who received the Good Samaritan Award.

Dzierzanowski was working at an insurance agency in St. Charles and head home soon, when she heard a loud noise and found a car slammed into the guardrail outside the office. “I was the first person on the scene… I couldn’t alert him, so I ran over into traffic [to reach the driver’s side],” and when she couldn’t find a pulse, Dzierzanowski said she performed CPR and ultimately saved his life.

Now, she sees CPR as an essential, life-saving skill everyone should learn. She recalls another workday when her employer scheduled a mandatory CPR class for all employees. At the time, Dzierzanowski was annoyed and felt that she had too much work to take care of for a CPR class, but now she is grateful she took the time for it.

Dzierzanowski said, “I don’t feel like a hero by any means, I think I did what anyone would do.” That’s just the message the Heroes Breakfast left us with once again this year. Our heroes plan to continue their good work. The Shorter family is planning to celebrate another big event this year for Olivia’s birthday. On September 15 they will hold a blood drive in Madison, Ill and are hoping to attract and even larger crowd than last year. To find out more information about the Shorters and their work, you can go to sickleschmikle.org.