“We hit rock bottom,” said Nick Tedeschi. “And the Red Cross gave us a start.”

Nick and his wife, Shirley, were going about their daily routine on Feb 13, 2016, when their condo caught on fire. They were left with the clothes on their back. “You never expect, when you leave for the day, to come back and have lost everything,” said Nick. Their Valentine’s Day plans were derailed as they tried to recover.

Nick and Shirley lost everything in the home fire.

The Red Cross responded to the fire, caused by a next door neighbor’s cigarette, to help them get back on their feet during the immediate recovery after their loss.

Nick reflected on that time, “I was totally gutted out.”

He talked about the months following the fire as a very difficult time. He would wipe his tears away and keep it inside while he was at work, delivering supplies to customers throughout the loop. He didn’t want anyone to know.

Nick and Shirley showed resiliency, and even humor, during a difficult time. Nick said he watched his house burn down while eating a bowl of chili he had picked up on the way home. He laughed, looking back on it, because the chili was from a local chain called Firehouse Subs.

They moved into her daughter’s basement for a few months until they were able to purchase a new home. “We were blessed tremendously,” Nick reflects. 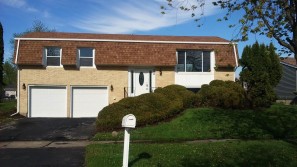 The house that Nick and Shirley purchased after a fire destroyed their previous home.

Now, he and his wife live in a house and, Nick says, they do things differently. They triple check everything before leaving the house, they put in new smoke alarms and carbon monoxide detectors, and they keep flammable things away from their house – they don’t even have a grill. “We have backyard BYOF parties: bring your own food,” said Nick.

In 2017, Nick plans to volunteer for the Red Cross to answer telephones at a Red Cross telethon. “You guys did so much. It gave us a starting point.”