(Chicago, IL) – When a Chicago Marathon runner signs up to run with Team Red Cross, they pledge not only their determination and skill, but also the promise of raising $1,500 to support the lifesaving mission of the American Red Cross.

Runner John Alegnani from Louisville, Kentucky is no stranger to this promise: this is his third Chicago Marathon running for 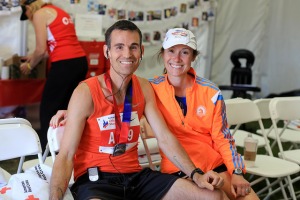 Team Red Cross. “When people decide to run (the Chicago Marathon), they often have a personal connection to the team they choose. I chose the Red Cross because they help so many people in need across the globe, that’s what keeps me coming back.”

131 runners crossed the finish line this year for Team Red Cross: the biggest number yet since the team was formed in 2007. Combined, over $200,000 was raised by our runners to benefit American Red Cross programs and services throughout Chicago and Northern Illinois: such as veteran assistance, reconnecting families, and home fire preparedness.

Tim, a healthcare investment banker was the  first Team Red Cross runner to cross the finish line  at 2:55.30. “I wanted to match the professional with the personal,” for his first Chicago Marathon, he said.

tion to run with that everyone I know is already familiar with.”

An official charity partner with the 2015 Bank of America Chicago Marathon, the Red Cross is proud to bring together runners of all ages and abilities since 2007 in support of the  its mission. If you or someone you know is interested in running the Chicago Marathon in 2016 with Team Red Cross, visit RedCross.org/chicagomarathon for details and sign up information.

For more photos of Team Red Cross at the Chicago Marathon: