I was fortunate to travel with another staff member from the Red Cross International Communications team to Ecuador in late March where we visited coastal areas, since earthquakes and tsunamis are big threats there. The American Red Cross, in partnership with USAID, funds preparedness programs to teach communities everything from first aid, and lifeguarding skills to disaster preparedness.  We also visited a few rural communities where flooding is their big threat, and I was in awe at how prepared everyone was.  Ever since these programs were implemented, the culture among the community has become all about preparedness.

We spoke to community residents who were so proud of the skills they had learned from the Red Cross.  I was particularly impressed when we visited a school in Manglaralto named Escuela Alfredo Sanz Rivera.  The kids were on vacation, but came to the school to greet us and show us everything they had learned through the program.  I was in awe as these kids, who were not much older than 12 years old, knew so much about first aid, how to use an extinguisher and how to carry a patient on a stretcher.  They told us how they had already put their skills to good use by helping out their siblings when one of them was burned.  I have a 15-year-old son and am sure his first instinct would be to use Google. 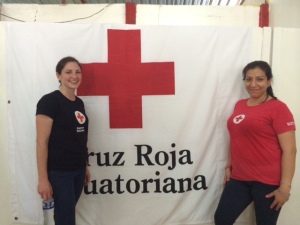 Some of the areas we visited had to great creative with their evacuation plans. The town of Briceño de Afuera is a small community outside of Guayaquil. People were excited that we had come to visit. They were eager to share their evacuation plans with us. This town is prone to flooding, but not from rain, rather from the nearby bodies of water that rises.

There is only one convenience store for the whole community and you must cross a bamboo bridge to get to the store. There were several of these bamboo bridges which looked like they could fall apart at any given moment. I actually had to cross one of the bamboo bridges and was scared to death.  The water below me looked muddy and dirty. But it helped me to think about the people that I had just met, that lived there and how it was their way of life.

They showed us the community evacuation plan they had created with the help of the Red Cross.  A member of the community had drawn the map and plan by hand. They went through every detail and were proud of the plan they had created. They demonstrated to us how they use a homemade firecracker to announce to the town that there is an evacuation. Yes, a firecracker!  It looked like a bottle rocket that I use to light up when I was a kid. It apparently works well as an early warning system for community members. The whole town attested to the fact that they knew exactly what to do when they heard the loud pop.

We are so fortunate to live in a country where we have so many resources and help at our fingertips.  However, it is extremely humbling to know that we, at the Red Cross are helping in other parts of the world.  Communities are being resourceful however they can.  I’ve never been more confident about the importance of teaching preparedness.  Because even if we think we know it all, our mission is still helping others, somewhere in the world in getting better prepared.

Written by Veronica Vasquez, a member of the American Red Cross of Greater Chicago, who traveled to Ecuador in late March 2014.