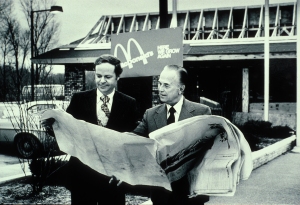 “If I had a brick for every time I repeated the phrase Quality, Service, Cleanliness, and Value, I think I’d probably be able to bridge the Atlantic Ocean with them.”

McDonald’s founder Ray Kroc never crossed the Atlantic with his franchise’s value statement like the aforementioned quote suggests. However, he almost had to cross the Atlantic as a Red Cross volunteer in 1917.

After dropping out of high school at age 15, Chicago native Ray Kroc lied about his age in order to join the American Red Cross as a World War I ambulance driver. Kroc was sent to Connecticut for training and served in the same regiment as another famous Red Cross alum and Chicago native—Walt Disney.

When World War I ended, Kroc had few prospects for the future. As a high school dropout looking for work, he sold milkshake makers, whereby he fortuitously encountered Dick and Mac McDonald’s restaurant in 1954. Kroc became the McDonald brothers’ franchising agent and eventually bought the franchise from them. Kroc went on to build the most successful fast food operation in the world.

Kroc never lost his passion for helping others that he channeled as a young boy when working for the Red Cross. In 1984, the Ronald McDonald House was established in memory of Kroc’s strong advocacy for children. Reflecting on the Ronald McDonald charity’s vision for helping children, one cannot help but think of the Red Cross, which aspires to “Turn compassion into action so that all people affected by disaster across the country and around the world receive care, shelter and hope.”

To find out how you can help make this vision a reality like Ray Kroc did, visit http://www.redcross.org.