This headline blared from every news channel and media outlet as we drove in the Emergency Response Vehicle to Wisconsin. A tragic episode had happened at a place of worship. On a fine Sunday morning, a gunman fired bullets at innocent worshippers at a Sikh temple (traditionally known as a Gurudwara). Sunday is one of the days when the community comes together to offer its prayers to God and the women cook traditional food for everyone. The vibrations of those shots were felt back home in India as well. People were shocked. They were speechless!

Being from North India and so close to the community, my heart went out to all the families and I could feel their pain. When given the opportunity to accompany the Mental Health services team for the memorial held for the victims, I didn’t think twice. It took me less than 10 minutes to put my current projects on hold, grab my Red Cross vest and head out to Wisconsin. Along with professionally trained Mental Health personnel from both the Chicago and Milwaukee Red Cross, I stood outside the temple.

The temple, which just a few days ago saw a horrific tragedy, stood majestically.  An American Red Cross tent was opened near the door and was equipped with food, snacks and water for the visitors and armed workforce, who were working round the clock to find answers to this tragic event. After receiving directions on our role, we went to the park where the memorial would be held. The annual and pre-planned ‘Oak Creek National Night-Out event’ was being held just a few feet from the park. There were many families in attendance. As soon as the members of the Sikh community started trickling in, the families at the event went forward and shared their condolences. It was extremely touching to see people from other cultures, who couldn’t understand the Sikh language, hold hands and hug the grieving community as a gesture of their compassion.

The Red Cross mental health services team consoled the still shocked community. They couldn’t believe that a catastrophe like this had happened to them. The team was there to comfort them, to tell them that everything would be okay, to give them a reassuring hug and an empathetic smile, to distribute tissues to wipe their tears. Being able to converse in their native language, I could feel their agony personally. I pushed back tears and my throat choked up as I translated the victims’ stories for the Red Cross team. But at that moment I was proud to be an Indian representing the Red Cross as well as the community. I was also grateful at the thoughtfulness and genuine initiative taken by the team to understand the culture of the community.

As we proceeded towards the vigil, volunteers from the Oak Creek community and the Salvation Army handed out candles and head scarves. Representatives from the Sikh Community shared how this terrible tragedy impacted all, but that they will not lose their values and principles and continue their faith in God. As hundreds of attendees held candles and bowed their heads in prayer, the Sikh community chanted their traditional prayers, and I could feel myself praying in the native language along with them. I’ve never felt closer to home!

The vigil ended with a moment of silence, and as the attendees departed, they left at peace with the thought that all communities are one and will stand by each other in joy and sorrow. 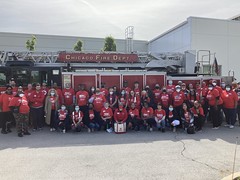 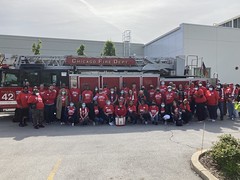 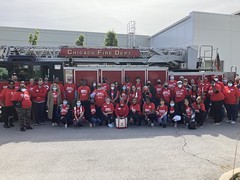