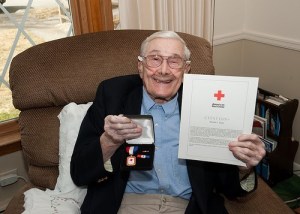 Don’t ask me why, but growing up I was always a history junkie. I blame it all on my 4th grade teacher because after reading Number the Stars I read every historical fiction book and watched every movie about World War II. To this day, when I think of the courageous, brave, and capable soldiers who stood in the face of danger and fought in the front lines of World War II, I envision Jude Law in Enemy at the Gates or Byron Henry from Winds of War. It wasn’t until Wednesday October 20, 2010, when I met Michael C. Bilder of General George Patton’s Third Army, author of “A Foot Soldier for Patton,” that I put a new face on these heroic soldiers I had grown up reading and learning about. It was as if all the characters I had read and watched popped out and introduced themselves to me.

Mr. Bilder served with the 5th infantry Division and fought in all five of the Third Army’s campaigns; fighting in France, Luxembourg, Germany, and Czechoslovakia. While stationed in England in 1943 Mr. Bilder received training from the American Red Cross as a “combat lifeguard” in preparation of D-Day. A combat lifeguard, while wearing 60 lbs. of equipment, must jump 25 ft. into a pool covered with burning oil. Once in the water, he had to shed his helmet, rifle, and rucksack and swim 75 yards underwater. Mr. Bilder used his newly acquired skills to dive after fallen GIs, unhook their equipment, and get them back to surface. It is for this that the American Red Cross decided to award him with the Lifesaving Award for the Professional Responder; for saving numerous GIs from drowning, including those who were previously wounded.

The American Red Cross’s Lifesaving Award is not the first award Mr. Bilder has won; in fact it is just one in a pile of impressive achievements and awards from numerous countries (one from Luxembourg, France, Czech Republic, and two from the USA). However, while all the other medals he has won (apart from his first Bronze Star Medal) have been given to him because of the number of lives he took during batter, The American Red Cross’s Lifesaver Award “is the most meaningful because it represents the lives I have saved, not taken.

Finally the day had come, all my reading was done and I was on my way to meet the heroic Mr. Bilder. As I walked into his house, saw him sitting on a big green padded lazy boy chair. When I introduced myself as an intern for the Red Cross a huge smile spread across his face and he said, “The Red Cross! The Red Cross gave me my stripes. I should be honoring them, not them me.”

As the day continued I came to realize that being a soldier isn’t about being a hero or getting awards, it is about serving your country, your people, and everything you believe in. Mr. Bilder went to Europe and fought a war far from our soil because he felt it was his duty, just as soldiers are doing today in Iraq. It is our duty as Americans to not only honor them and their courageousness, but never forget the battles and struggles they have fought to protect our liberty, democracy, and country. What they have done to protect us.

As Mr. Bilder said “I have always done amazing things I suppose, but I am really just a regular Joe.”

More pictures of our visit with Mr. Bilder

We have a lot to be thankful for this holiday season, and the soldiers in the armed forces is one of them. We are inviting the public, until December 10, to send a “touch of home” to the armed forces through hoilday cards; a small effort that goes a long way and impacts the hearts of our American Soldiers who can’t be home with their families this holiday season. Please, get involved and send your holiday cards today: