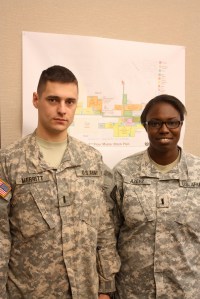 Trepidation. Anxiety. Horror. Panic. All of these emotions flooded the minds, hearts, and bodies of American citizens at 8:45 a.m., Eastern Standard Time, nine years ago today. 2,983 lives were lost that day, and the fear from that day still resonates strongly within the depths of our hearts. Soon after the terrorist attacks of September 11th, the United States declared war, The War on Terror.

The International Committee of the Red Cross, and Red Cross chapters across America have worked closely with our military to connect our troops with their families since the 1800s. Just like every other war that US has been involved in, the American Red Cross has been there to support the families of soldiers who have been deployed overseas since the beginning of The War on Terror. From financial assistance to coping with deployment classes, the Red Cross offers comprehensive and effective methods for soldiers to be connected with their loved ones back home.

Today I was assigned to attend an orientation for soldiers returning from the Middle East at the Jesse Brown VA Medical Center in the heart of the Illinois Medical District. The Red Cross of Greater Chicago sponsored today’s orientation by providing coffee and donuts for the more than 130 soldiers in attendance. 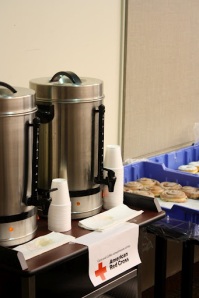 I had the great pleasure of meeting two individuals who served with the US Military in Afghanistan. First Lieutenant James Merritt and First Lieutenant Amy Azeez have witnessed how the Red Cross serves our military forces. Lieutenant Azeez, who grew up in Chicago, told me the story of a soldier from her troop that got into an awful motorcycle accident. The soldier riding the motorcycle was in critical condition, and needed additional blood to survive. Lt. Azeez informed me that the blood used in the soldier’s transfusion came directly from a Red Cross blood drive. That blood ended up saving his life.

Blood drives, a well-known service that the Red Cross coordinates and provides, is just one program from our multi-faceted commitment to our troops overseas. The Red Cross also provides an emergency communication outlet for soldiers that relays messages between the soldier and their family. When a family member has fallen ill or has passed away, a soldier’s family can send a message to him or her, and the Red Cross will relay it to wherever the soldier is stationed. “The Red Cross acts as a gatekeeper between us and our families back home,” First Lieutenant James Merritt tells me. Lt. Merritt, also from Chicago and attending graduate school at Purdue, described for me that a soldier in his troop in Afghanistan received a Red Cross message that his grandfather had fallen ill. Within hours, that soldier was cleared by his commanding officer to head home and visit his grandfather before he passed. Lt. Merritt explained that if a soldier receives a Red Cross message they immediately get priority placement on flights back the US, and that the soldier is given ample time to be at home and cope with their family. For Lieutenant Merritt, the emergency communication service from the Red Cross is something that has directly impacted him and his family. 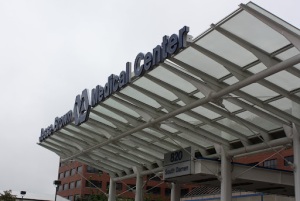 “I was training as a combat medic at Fort Sam Houston in San Antonio when I was told that the Red Cross had a message for me,” Lt. Merritt recalls. The message contained news that his grandmother had passed away. Within a few hours, Lt. Merritt was on his way home to be with his family during that time of mourning.

Lt. Azeez and Lt. Merritt both explained to me that without the Red Cross, the process a soldier would have to endure to make his or her way home would be long and arduous. Both Lieutenants had looks of astonishment when recounting how fast and effective the Red Cross services to the armed forces were.

As an intern with the Red Cross of Greater Chicago, I am learning everyday new ways that the Red Cross is dedicated to helping people around the world. These stories from Lieutenant Azeez and Liteutenant Merritt make me even more grateful to be a part of such an amazing organization.